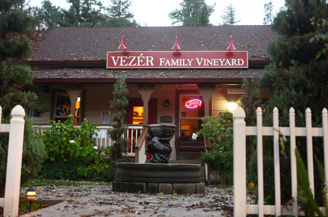 Comments: Vezer Family Vineyard is a Suisun Valley Winery, which is owned by Frank and Liz Vezer. Their winery is best known for their Petite Sirah and their Zinfandel, which are rated among the best in the region, and are used in well-known wines, such as Sin Zin and Ravenswood. The Suisun Valley has the perfect soil and micro-climate which enables these vines to develop the choicest grapes. For growing Petite Sirah, the Suisun Valley Appellation is rated as the oldest and best in the State of California by the U.C Davis University. In 2001, the Vezers decided to establish their own wines and produced their first vintage of Zinfandel in the year 2003. Since then they have produced eight additional vintages. The Vezer wines are winning their vineyard accolades and awards from across the country as well with international panels. The Vezer family practices the 1938 approach to their wine making, which was born with Frank Vezer's father, Frank Vezer II. This method consists of balancing opposing elements to create wines that are dynamic, complex, and embody the classical ideals that define the world's finest wines. With such a good backbone, it is no wonder they are such a success.