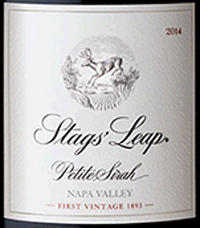 Comments: Located at the heart of Stags Leap District, the original Stags' Leap Winery (Est. 1893) continues a proud winemaking heritage in the prestigious appellation that bears the winery name. Stags' Leap Winery was founded by Horace Chase and his wife Minnie Mizner Chase, the daughter of a prominent San Franciscan and U.S. Senator. Since that time, little has changed at the century-old, 240-acre estate, situated in its own protected valley on the eastern side of the Napa Valley. Naming the property after an ancient Native American legend that told of a mystical stag leaping across crags of the palisades to the east, the Chases built a gracious manor house of indigenous stone, excavated wine caves, and installed what it believed to be Northern California's first in-ground, fresh water swimming pool. Stags' Leap quickly became a center of social life, attracting the era's leading politicians, artists, and writers.